The current Teuro Granen Tilburg bv organisation has existed since 1987.br /> However, it was preceded by a lengthy history.

Teuro Granen Tilburg bv originated from the Teurlings family’s history as millers whose legacy stretches further back than this brief outline gives us scope for.
Adrianus Antonius Teurlings was born in 1867 and became the miller at the mill on the Lijnsheike in Tilburg according to the archives.

As was the custom, his occupation was passed from father to son.
His son Willem Teurlings was born on 28 December 1897 and continued his father’s work. He married Maria Catharina de Jong 15 February 1927, thereby creating the founders’ company name: Teurlings-de Jong in Tilburg.

In 1923, the first company from Tilburg, another trading company Schraven-Eijsbouts took up residence at the recently dug Piushaven. Later on, Teurlings-de Jong moved from the Lijnsheike to the Piushaven in Tilburg. 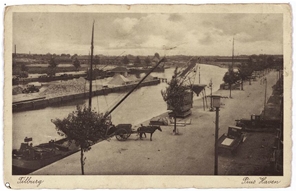 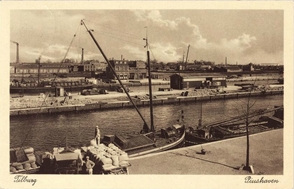 The postcard features a photograph that depicts the first ship being unloaded in the harbour on 20 March 1923. The load consisted of bales of wheat flour for the meal – animal feed factory Schraven-Eijsbouts.

Willem and his wife had a daughter named Corrie who had the business continued after her parents died. Over the years and for various reasons, the company ceased manufacturing animal feed transforming itself into a trading company for animal feed raw materials, initially for local buyers.

Due to the lack of successors, Corrie decided to sell her business. Afterwards, its trading activities were continued under the current name, Teuro Granen Tilburg bv, and the company developed into an international trading company.